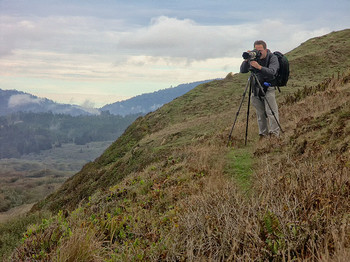 Scott was born and raised in Southern California and has lived most of his adult life in various Northern California locations.  His degree in Environmental Biology sparked a strong interest in the natural world that has continually grown throughout his life.  He received his first 35mm SLR camera as a college graduation gift in 1984 and has been seriously photographing the natural world ever since.  Over those years, Scott has spent significant time creating photographs in various locations, including the coastal areas and temperate forests of the western US, the mountains of the Sierra Nevada and Northern Rockies, and the Sonoran Desert region of the Southwestern US and Baja Peninsula.  He has always felt most at peace within the varied coastal and redwood forest habitats of Northwestern California and decided to settle there, leaving a career working in the environmental engineering industry in the San Francisco Bay Area.

In the nearly 20 years that he has been living on the Southern Mendocino County Coast, Scott has developed an intimate photographic relationship with its unique landscape. His images capture the subtle beauty of the coast and forests with a highly unique, “painterly” style that emphasizes the quiet solitude of these landscapes. Scott’s main photographic goal is to be able to communicate this unique viewpoint to others, such that they are able to look upon his images and develop a new and stronger appreciation for life's details. He believes that a fine art photographic image is most powerful if it can be viewed with increasing pleasure repeatedly for many years, rather than simply have a strong initial impact.

“When I go into the field, I rarely carry any strongly preconceived ideas about subject matter for my images. I study the light, as it falls on the landscape, and look for ways in which it may bring out the hidden beauty around me. When things are going well, I literally enter a meditative state of mind, which allows me to create images that communicate the subtle emotions aroused by the scene surrounding me.”

While the vast majority of his artistry takes place in the field, Scott’s technical mastery in the “digital darkroom” allows him to optimize each image digitally so that the finished print matches his original artistic vision.

For the past several years, Scott has shown his fine art photography prints at galleries and exhibits along the west coast. His work is represented in private collections throughout the United States and beyond.  His images taken within the Point Arena-Stornetta Public Lands were used in the public relations effort to eventually have that area added as the first mainland-based unit of the California Coastal National Monument in 2014. Additionally, Scott works as the Operations Manager at the Gualala Arts Center. Scott's work can be found at the Mendocino Coast Photography Gallery in Fort Bragg, the Artist’s Collective in Elk, the Gualala Arts Center and in various regional venues.